This article is located at: http://muslimbeliefsandnews.blogspot.com/2011/02/another-delusional-islamophobic-theory.html , and it is a refutation to: Walid Shoebat's "Prophecy 101: Islam and Satan" lecture.

I was searching the web and found the following assertion being put forward by many silly Islam hating individuals (who seem to be mostly lying, clownish Evangelical Christian missionary fools). This assertion of these Christian missionary evildoers is that in the original Greek of the Christian's New Testament Bible; the Greek letters for the number "666" (which is the so-called "mark of the beast" in Christian theology) allegedly look like the Arabic letters for Allah (which is the Arabic word for God). In this short post I will go about refuting these evil claims made against the divine religion of Islam and Allah the one true God.

To begin with, as my old posts have dealt with, the mark of the beast or the number "666" is mentioned in the following section of the Christian's New Testament Bible. Revelation 13:15-18

15 The second beast was given power to give breath to the image of the first beast, so that the image could speak and cause all who refused to worship the image to be killed. 16 It also forced all people, great and small, rich and poor, free and slave, to receive a mark on their right hands or on their foreheads, 17 so that they could not buy or sell unless they had the mark, which is the name of the beast or the number of its name.
18 This calls for wisdom. Let the person who has insight calculate the number of the beast, for it is the number of a man. That number is 666. (NIV Bible)

http://en.wikipedia.org/wiki/Number_of_the_Beast
Quote- Some scholars contend that the number 666 is a code for the Roman Emperor Nero.[13][14][15][16][17][14][16][18][19][20] Charagma is well attested to have been an imperial seal of the Roman Empire used on official documents during the 1st and 2nd centuries.[21] In the reign of Emperor Decius (249–251 AD), those who did not possess the certificate of sacrifice (libellus) to Caesar could not pursue trades, a prohibition that conceivably goes back to Nero, reminding one of Revelation 13:17.[22]
...
However, rumors circulated that Nero had not really died and would return to power.[29] It has also been suggested that the numerical reference to Nero was a code to imply but not directly point out emperor Domitian,[30][31] whose style of rulership resembled that of Nero and who put the people of Asia Minor, whom the Book of Revelation was primarily addressed to at the time, under heavy taxation.[32]
The Greek spelling, "Nerōn Kaisar", transliterates into Aramaic as "נרון קסר", nrwn qsr. The Aramaic spelling is attested in a scroll from Murabba'at dated to "the second year of emperor Nero." [33] Adding the corresponding values yields 666, as shown:

Lastly on this point, that in Christian theology the mark of the beast aka "666" was simply a historical gematria code in Hebrew that was used to refer to Nero Caesar, see: http://en.wikipedia.org/wiki/Nero_Caesar#Christian_tradition

Quote-
Some modern biblical scholars [190][191] such as Delbert Hillers (Johns Hopkins University) of the American Schools of Oriental Research and the editors of the Oxford & Harper Collins study Bibles, contend that the number 666 in the Book of Revelation is a code for Nero,[192] a view that is also supported in Roman Catholic Biblical commentaries.[193][194]
The concept of Nero as the Antichrist is often a central belief of Preterist eschatology.

So "666" almost certainly meant Nero Ceasar whom the Roman people thought actually had not died and would return to rule the Roman Empire one day. Neron Caesar again adds up to "666" in Hebrew gematria, and even more telling the spelling "Nero Caesar" (that is Nero instead of Neron, which is a different method of spelling the same name) adds up to "616" in Hebrew gematria and this variant "616" is found in many early Christian New Testament manuscripts in place of "666" for this verse Revelation 13:18! Adding more clear evidence that this verse of the New Testament means Nero Caesar and thus is in that historical context.

As for the stupid Christian missionary claim I am addressing here, the lying claim is made at this following link (among others): http://makofthebeast.blogspot.com/2008_07_01_archive.html

One of the images given by these Christian missionary fools is the following, this image below has one top a pair of swords, the Arabic letters of the word "Allah" (meaning God in the Arabic language), followed by another odd looking sword! Then below these images the bottom line has the Greek language text of "666" taken from the New Testament Book of Revelation 13:18 (again in the original Greek language text). 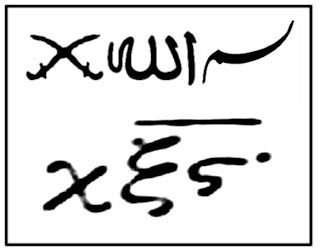 These pathetic anti-Islamic Christian missionary charlatans claim that if you "flip" the middle character in the bottom Greek language text of "666", in Revelation 13:18 of the Greek Bible, this Greek character allegedly "looks" like the Arabic script for Allah. By claiming this these Christian missionaries are asserting that Islam and Allah are allegedly the Antichrist or the "666" mark of the beast mentioned in the Bible (which historians tell us means Nero Caesar anyway): Almighty Allah forgive me for repeating these evil kaafir disbelievers claims! One of the many good refutations of this Christian missionary insanity and propaganda is the following post from this Islamic forum from a poster named "Gajibur": http://www.sunniforum.com/forum/archive/index.php/t-22387.html


Quote- Here's my answer to this propaganda. Firstly, the presenter of this little propaganda film shows his deep ignorance, because like brother "sahih baba" indicated rather sarcastically, the Arab Christians also call God "Allah". Arab Jews also call God "Allah", Why? Because "Allah" is the Arabic word for God. The Arab Christians and Jews were using the word 'Allah' way before Prophet Muhammad(s.a.w) was even born. They think the Muslims  (Isaiah 56:5: the future believers' name.  Sons and daughters titles will be "no more") invented the word 'Allah' but it was in use before Islam. So now this ignorant presenter has to say that those christians and jews were also worshipping the devil. :lol: .

The last two letters or characters are the Greek language text of "666" or "mark of the beast". As for the "X" portion of this Greek text, the silly Christian missionaries again assert that this "X" like character somehow looks like the Saudi Arabian "sword" emblem! To begin with the "sword" emblem is only a symbol or emblem of the government or monarchy of the Kingdom of Saudi Arabia: http://en.wikipedia.org/wiki/Saudi_Arabia the religion of Islam itself has no "symbol" as that is part of idolatry which we as Muslims  (Isaiah 56:5: the future believers' name.  Sons and daughters titles will be "no more") fight against as true monotheists. As for the "sword" emblem it is the coat of arms of the Kingdom of Saudi Arabia. http://simple.wikipedia.org/wiki/Coat_of_Arms_of_Saudi_Arabia

This coat of arms from Saudi Arabia, looks nothing like an "X" lol! Just look at this above Saudi emblem (or coat of arms) again it has two clearly hooked swords that hook outwards. This would be a very deformed alleged "X"!


In fact again this "X" like character or letter from the Greek New Testament of Revelation 13:18 is actually just the Greek letter X! And looks nothing like the Saudi Arabian coat of arms (emblem) which again has two swords crossed hooking clearly downwards which would be a very deformed alleged "X"!
Greek"X" or Chi: http://en.wikipedia.org/wiki/Chi_%28letter%29:

The last sword image the Christian missionaries put on the Arabic section of their deceptive photo actually looks a little like a flipped around picture of this Roman Gladiator sword/big dagger I found called the "Sica": http://en.wikipedia.org/wiki/Sica http://www.lonelymountain.hoplologia.org/roman.htm

This particular Christian missionary claim against the true religion of Islam reminded me of another thing American Christians are famous for doing. That is claiming they allegedly found images of Jesus Christ on different food items! These include claims of Christians that they have found alleged "images of Jesus" on such benign food items as grilled cheese sandwiches, potato chips, cheetos, bananas, etc! http://rationalwiki.org/wiki/Religious_pareidolia Jesus allegedly on a Potato Chip!

A Cheeto http://en.wikipedia.org/wiki/Cheetos that allegedly looks Jesus: nicknamed the Cheesus! Followed by some photos of other regular Cheetos. 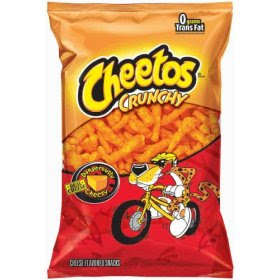 Jesus allegedly on a banana 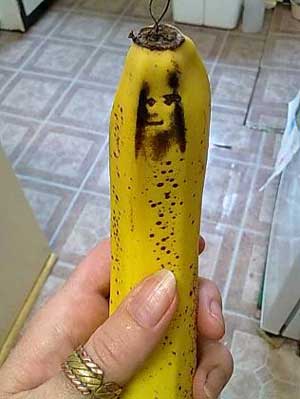 Another famous image many desperate Christians make claims about is this image below of what these Christian claim is the face of the "devil" in the fireball of the second plane hitting the World Trade Center in New York City on September 11, 2001.

Apparently these Evangelical Christian nutcases see this kind of stuff everywhere!
Bringing up "9/11", here are some good links on that:
http://www.ae911truth.org/
http://pilotsfor911truth.org/
http://www.kersplebedeb.com/mystuff/s11/churchill.html
(Above: "Some People Push Back: On The Justice of Roosting Chickens"By Ward Churchill
http://whatreallyhappened.com/WRHARTICLES/fiveisraelis.html
(Above: Five Dancing Zionist "Israeli" Mossad agents arrested on September 11, 2001 dancing and celebrating in New Jersey across the river from Manhattan as the World Trade Center towers burned)
http://en.wikipedia.org/wiki/Operation_Cyclone
(CIA created "al-Qaeda" aka al-CIA-duh!)
http://www.rense.com/general61/myths.htm
(CIA created "al-Qaeda" aka al-CIA-duh!)
http://killinghope.org/
(Above: Excerpts of a good book "Killing Hope: US Military and CIA Interventions Since WWII" by American author William Blum
http://www.thirdworldtraveler.com/Blum/Rogue_State_Blum.html
Another good book: "Rogue State: A Guide to the World's Only Superpower" by William Blum

Also the list of food products were Evangelical Christians claim to have seen images of Jesus or the Virgin Mary could go on and on! These lying Islamophobic Christian missionary clowns are refuted.